Iodinated contrast is essential to highlighting the vascular system in computed tomography angiography (CTA) studies. Because contrast is one of the largest expenses in radiology, managing utilization costs is a prime concern for imaging centers. As a result, today’s leading radiology practices are using smart contrast injector platforms to deliver superior patient care with greater efficiency and reduced operational costs.

“NEXO® makes protocol adjustments quite simple. If we want to change any of them, we do that once, at a laptop, then push that protocol out to all the different sites and injectors,” he said.

Distributing the CTA protocols across the imaging practice helps to ensure high-quality and consistent output and reduce operator error or deviations that can occur during protocol selection.

After each study, the system generates a report that consists of a DICOM image of the injector parameters; these include the amount of contrast and saline loaded and delivered; the patient’s weight, eGFR, and creatinine; contrast flow rates and pressures (PSI); and a graph of the injection and contrast peak. Dr Hallett said this report is extremely valuable for troubleshooting suboptimal exams.

“Being able to have the injector data available during the primary exam interpretation increases our confidence that we have acquired quality data and have troubleshot any problematic exams,” he said. 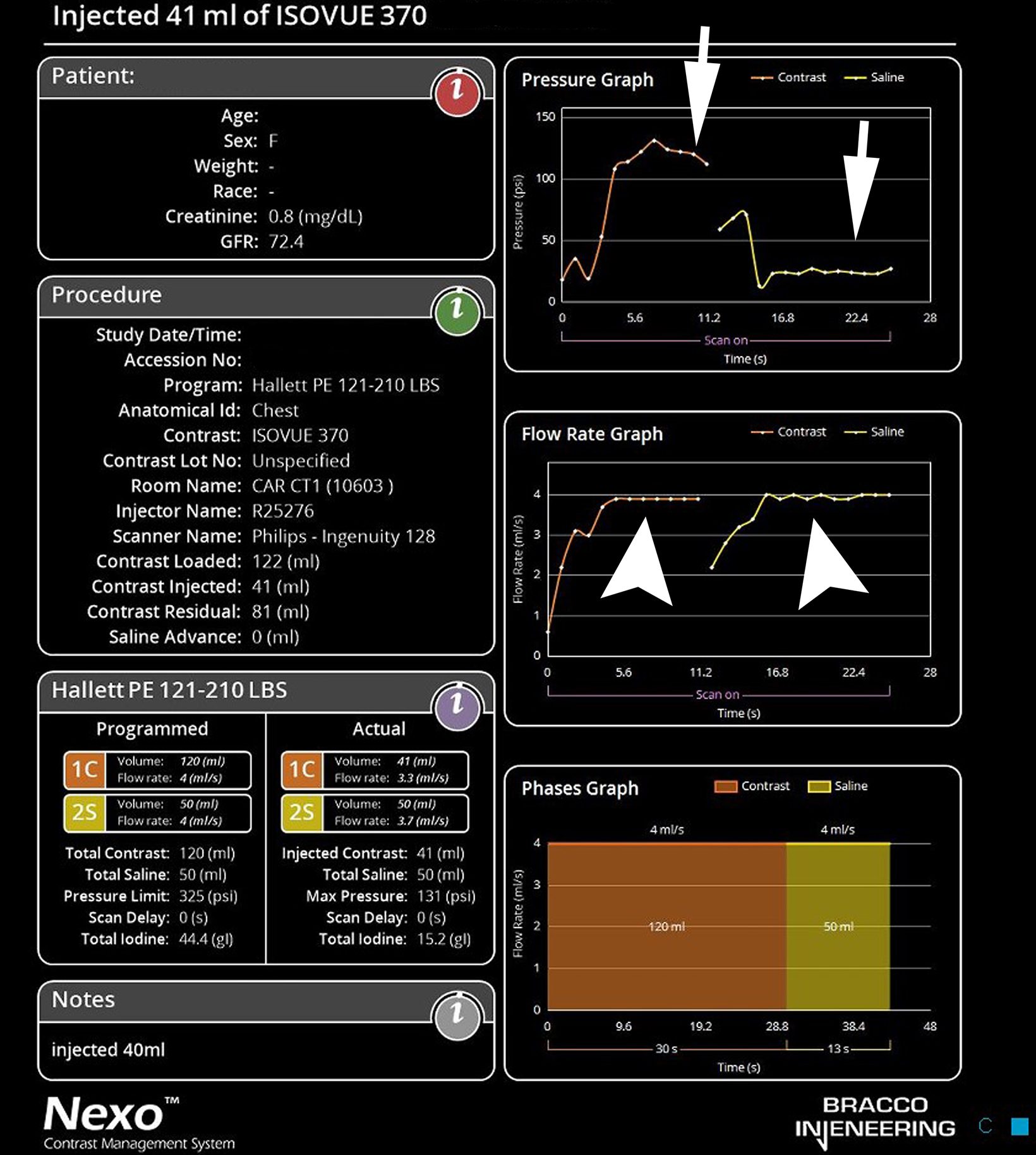 For standard CTA exams, contrast is injected at a patient-specific volume and flow rate, and imaging is completed during peak vascular enhancement. The exam protocols typically employ higher flow rates for optimal vascular enhancement. Imaging is performed using bolus triggering in the vascular territory of interest. The protocols also utilize weight-based contrast dosing to improve consistency across a wide range of patient sizes.

Saline also plays an important role in CTA, especially in cases of suspected intraluminal pathology such as pulmonary emboli and vascular stenoses. For these exams, administering saline before and during the injection protocol is critical to ensure a tight bolus of contrast delivery and to hydrate the patient.

These protocols utilize the Saline Advance feature on the EmpowerCTA®+ injector to enhance patient safety and evaluate IV integrity before the bolus injection, which helps reduce the risk of extravasation and contrast load. Through a simple, weight-based protocol, patients receive the appropriate contrast volume and flowrate based on their size. (The protocol is modified for renal dysfunction when necessary.)

“We use a test injection of saline at the same flow rate as our expected contrast rate, which allows us to prospectively assess the capability and function of the IV cannula before injecting a larger volume of contrast. It helps us identify any problems with the IV before the contrast injection begins. This has reduced our extravasation rate and complication rate significantly,” said Dr. Hallett.

Following the bolus administration of the contrast, a five-second saline flush or “chaser” is delivered to keep the contrast bolus compact.  Delivering saline at a high flowrate also provides higher and longer peak contrast enhancement. Saline administered before and during the procedure also adds hydration, which helps reduce the risk of contrast-induced nephropathy (CIN), a condition that can occur in renal-compromised patients between 24 and 48 hours following the administration of iodinated contrast. In patients with compromised renal function, adjustments for the lowest amount of contrast based on each patient’s renal function and weight are made.

To deliver patient-specific imaging, Dr. Hallett states, “we do everything we can to adapt our imaging protocols so we can minimize contrast and maximize diagnostic information from that scan.”

Utilization of the Saline Jump feature is another means to improve patient care during CTA. Dr. Hallett continues, “With Saline Jump, we now have the ability to switch over to saline when the exam image quality is sufficient – without waiting for the entire contrast bolus to be administered. This ultimately reduces the amount of contrast delivered to the patient.”

Upon analyzing the injection data, Dr Hallett and his practice further revised their CTA protocols to reduce the amount of contrast needed for optimal imaging. The updated protocols have led to contrast reductions ranging from 15% to 60%, depending on the exam and patient size, with larger reductions for pulmonary embolism (PE) studies and smaller patients. Under the PE protocol, exams are obtained with paused respiration and the mouth open to avoid Valsalva, and low kVp imaging with lower flowrates. This has led to a 95% diagnostic rate (versus 85% previously), with contrast savings of 55% for patients weighing less than 132 lbs to 33% for those weighing more than 220 lbs.

The benefits to the patient are significant when diagnostic images can be achieved with less contrast, lower radiation dose, and fewer repeat exams. “The impact on patient care is tremendously improved with these protocol adjustments,” Dr Hallett emphasized.

Image output from NWR Saline Jump protocol CTA (A) compared with prior protocol
two years previously, which utilized 100 mL contrast injection(B). Left pulmonary artery
aneurysm again noted (arrow), and unchanged in size. Contrast enhancement in the
LPA is similar between the exams =(395 HU in A, 380 HU in B).

Since installing the NEXO® software on the EmpowerCTA®+ injectors, Northwest Radiology is well on its way to achieving its clinical and business goals.

“There is a cost savings for both the patient and the practice. Standardizing protocols leads to consistent quality exam output, which leads to more efficient diagnosis and fewer repeat exams. This saves patient time, technologist time, scanner time and supplies,” he said.

The SmartInject platform has positively impacted the practice’s bottom line. “We continue to be impressed with the analytics provided by NEXO®, including contrast volumes loaded versus the amounts used, thus impacting what is regularly ordered,” Dr Hallett said. “From a forecasting perspective, we can leverage the dashboard output with the collected data to plan and order contrast and supplies more efficiently, which allows us to fine-tune our ordering patterns given the seasonal variability in our exam volumes.”

The SmartInject technology will continue to support consistency and quality as Northwest Radiology adds a fifth outpatient imaging center to its network.

“As we open our next outpatient center, being interconnected by NEXO® and the EmpowerCTA®+ injectors allow us to improve patient care, streamline ordering, and standardize our CT protocols where, perhaps, we wouldn’t have previously,” said Dr. Hallett.

As radiology practices seek to improve efficiencies and standardize imaging protocols, Dr. Hallett advises, “If you have a practice that is heavily involved in CT, particularly CT angiography, [and wishes] to improve workflow and imaging outcomes by using less contrast, the installation of a centralized server-based program that automatically collects the contrast injection data, is an excellent solution.”