Click here to view and interact with the DICOM images for Figure 2 in the Exa-PACS zero foot print viewer provided by Viztek.

A 69-year-old female presents to her physician with complaint of 30 pounds unintentional weight loss and abdominal fullness, for which the physician ordered a CT chest/abdomen/pelvis and screening mammogram. At mammography, a 5 cm area of architectural distortion was identified in the left breast at 11:00 posterior depth. The architectural distortion was better visualized on digital breast tomosynthesis (DBT) and persisted on diagnostic imaging. Ultrasound demonstrated an ill-defined hypoechoic mass that corresponded to the area of the mammographic abnormality in addition to abnormal enlarged lymph nodes in the left axilla. US-guided biopsy of the left breast mass and abnormal axillary lymph node revealed pathology consistent with infiltrating lobular carcinoma, not otherwise specified (ILC NOS) and metastatic disease from a breast primary, respectively. The CT showed marked wall thickening of the stomach, small bowel, bladder in addition to moderate ascites. Biopsies from the gastroesophageal junction to the antrum showed metastatic lobular breast carcinoma.

Left MLO DBT images (Figure 2), specifically slice 32, show the architectural distortion to be much more conspicuous in this patient with dense breast tissues.

US of the left breast showed an ill-defined hypoechoic mass with posterior acoustic shadowing (Figure 3).

Click here to view and interact with the DICOM images for Figure 2 in the Exa-PACS zero foot print viewer provided by Viztek. 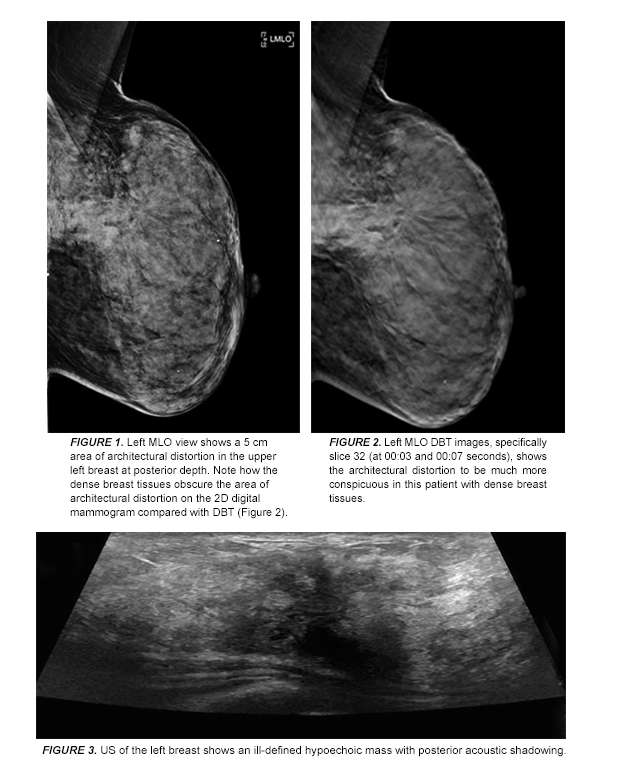 Infiltrating lobular carcinoma of the left breast, with metastases to the left axilla and gastric wall.

ILC approximately accounts for 10-15 % of all invasive breast cancers.1 On pathology, ILC is defined by lack of cell-cell cohesion with negative e-cadherin stain.2 The cancer’s infiltrative growth pattern makes it difficult to detect both clinically and by mammography.3 On mammography, ILC is typically known to present as an area of architectural distortion with or without central mass or as a focal asymmetry.4 ILC is frequently seen in only one view, most commonly in the craniocaudal view where the degree of compression is better than on MLO4

Interestingly ILC has a propensity for metastases to the peritoneum, retroperitoneum, and gynecologic organs.5,6 The patient featured in this case had ascites with gastric metastases.

On ultrasound, ILC can have varied appearance that depends on whether the ILC forms a central mass and the relative proportion of the lesion that has a diffusely infiltrating component. Lesions that are solely infiltrating will be easy to miss by US. When the ILC does form a mass, it can appear as a hypoechoic mass with angular or ill-defined margins and shadowing. Sonography has been known to play an even more important role in diagnosis of ILC than other types of breast carcinoma because there are frequently false negatives by mammography.7