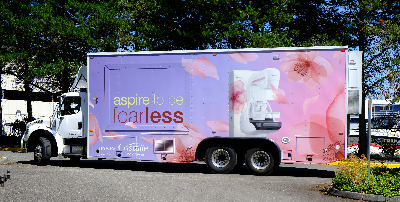 Nicolle Lochner discovered she had breast cancer in August 2007 at age 41, when an aching lump in her left breast proved to be Stage 2B cancer that had spread beyond her lymph nodes. Nothing could prepare Lochner for the fear she felt, especially when she thought of her 5-year-old daughter and 3-year-old son.

Within a few weeks, she underwent a double mastectomy and a left axillary node dissection, followed by four months of chemotherapy and six-and-a-half weeks of radiation. She was declared cancer-free on Christmas Eve 2008.

Lochner shared her story during The Pink Table Brunch, on June 12, 2019, in Portland, OR. The brunch was an educational event held to kick off FUJIFILM Medical System’s U.S.A., Inc.’s “Aspire to Be Fearless” campaign, a new nationwide awareness effort focused on improving access to breast health education and mammography screening services for every woman who needs it, especially those in underserved communities.

“I believe the most difficult part of a cancer diagnosis is not knowing what's coming next. Fear lives in the dark places of not knowing,” Lochner said at the event. “I love that we branded this campaign, ‘Aspire to Be Fearless,’ because I know through early detection, the integrated care that I received from multiple institutions made a huge difference in my outcome.” 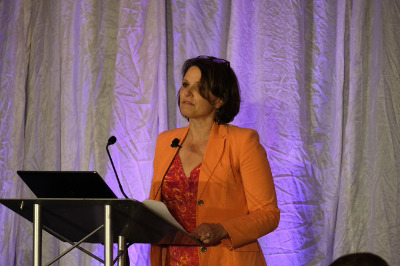 Nicolle Lochner speaks at The Pink Table Brunch to kick off FUJIFILM’s
“Aspire to Be Fearless” campaign.

Breast cancer is one of the most feared cancers among women, with some women feeling apprehensive enough to put off their breast exams. Recent studies indicate that only 65% of women over 40 have had a mammogram in the last two years, with that number falling to around 50% for women at or below the poverty level.

But research shows that finding breast cancer early and getting state-of-the-art treatment are the most important strategies to prevent deaths from the disease. Women whose breast cancer is detected at an early stage have, on average, a 90 percent five-year survival rate. Unfortunately, minority women are more likely to be diagnosed at later stages of breast cancer, in part due to barriers to timely screening mammography, resulting in poorer mortality and survival outcomes.

The “Aspire to Be Fearless” campaign aims to help improve women’s access to screening mammography. At the center of the campaign, Fujifilm will be traveling around the U.S. with its “Aspire to Be Fearless” mobile mammography coach to provide educational opportunities for clinicians, raise awareness about the importance of screening, and in partnership with clinician partners, will provide free mammograms to underserved population in key locations.

“We know that one in eight women will receive a breast cancer diagnosis within their lifetime, but what we also know is that the sooner that breast cancer is detected, the more treatable and survivable it proves to be,” said Susan Crennan, Women's Health Product Marketing Manager, FUJIFILM Medical Systems U.S.A., Inc. “This is when mammograms become a core part of the screening process. Mammograms cannot work if women do not get them. By reaching out to women across the U.S., we hope to engage more of them in the screening process and detect more breast cancers earlier to have a lasting impact on women’s lives.”

The “Aspire to Be Fearless” mobile mammography coach is equipped with a waiting room, a dressing room, the ASPIRE Cristalle digital mammography system with digital breast tomosynthesis, and the ASPIRE Bellus II mammography diagnostic workstation.

By partnering with leading local providers and outreach groups, this mobile coach will be bringing free advanced 3D mammography screening to communities across the U.S., offering high-quality breast screening at no charge so women from all walks of life can fearlessly take charge of their breast health. 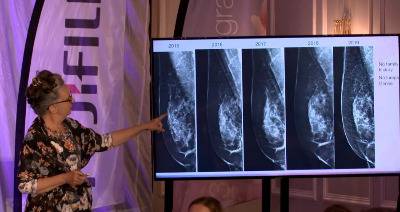 ADr. Amy Thurmond shares the importance of Tomosynthesis
(3D Mammography) at The Pink Table Brunch to kick off Fujifilm’s
“Aspire to Be Fearless” campaign.

Dr. Amy Thurmond shares the importance of Tomosynthesis (3D Mammography) at The Pink Table Brunch to kick off Fujifilm’s “Aspire to Be Fearless” campaign.

“We want to make sure that we are serving the patient always, and in order to do that we have to have the ability to detect as early as possible, as comfortably as possible, as quickly as possible. All that pivots around the patient, but those things also translate over to the technologists and the radiologists as well, because they’ll get better instruments to read and technologists will be able to do the exams more quickly,” said Rick Banner, Senior Director of Marketing, FUJIFILM Medical Systems U.S.A., Inc.

For Continuing Medical Education for Radiologists and Mammographers visit appliedradiology.org/6a

“Aspire to be Fearless” — Fujifilm’s Campaign Is Inspiring Women To Be Fearless When Getting A Screening Mammogram.  Appl Radiol.