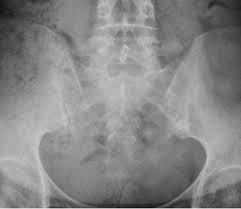 New research presented at ACR Convergence, the American College of Rheumatology’s annual meeting, shows that an artificial intelligence-based analysis model, called an artificial neural network, enables accurate detection of definite radiographic sacroiliitis in people with axial spondyloarthritis, an advance that could be useful for both diagnosis in the clinic and classification of patients for inclusion in clinical trials (ABSTRACT #2018).

If doctors suspect AxSpA, they typically recommend conventional radiography, or X-rays, of the sacroiliac joints. Magnetic resonance imaging (MRI) is also used to assess patients with suspected AxSpA. Researchers select patients for enrollment in clinical trials using classification criteria for their disease. Patients are classified as having either radiographic or non-radiographic AxSpA based on definite signs of the disease on their imaging seen by readers. However, the reliability of radiographic sacroiliitis assessment is known to be poor. Expert readers – as opposed to evaluation by local rheumatologists or radiologists – usually produce more reliable results, but they are not available in many locations.

One proposed solution to this problem is determining if an artificial intelligence (AI)based model can be used to analyze radiographs for improved accuracy of these readings making them comparable to the top experts. This study set out to develop and validate an artificial neural network model that uses AI technology to detect definite radiographic sacroiliitis as a manifestation of AxSpA.

“Conventional X-ray of sacroiliac joints is still the first and sometimes the only available imaging procedure to diagnose AxSpA in many parts of the world,” says study co-author Professor Denis Poddubnyy, Head of the Division of Rheumatology at Charité Universitätsmedizin Berlin in Germany.

The artificial neural network achieved excellent performance in accurately recognizing definite radiographic sacroiliitis in these patients, with high ratings of sensitivity and specificity, the study’s findings showed. This artificial intelligence-driven model could enable accurate detection of sacroiliitis, making it relevant for both diagnosis of patients in the clinic and classification of AxSpA when selecting patients for clinical trials.

“I do think that the developed might be helpful in both clinical practice (as a decision-supportive tool) and research (classification of the included patients),” says Dr. Poddubnyy. “However, this is only the first step. The next big challenge is to develop an artificial intelligence-based tool for the assessment of MRI of sacroiliac joints. This would be especially relevant for the diagnosis and differential diagnosis of AxSpA at the early stage.”