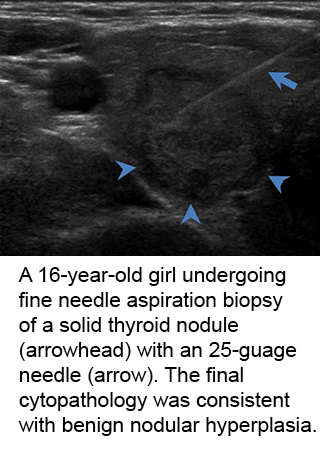 Researchers at the University of Michigan Health System in Ann Arbor decided to assess the diagnostic utility of US-FNAB in pediatric patients who had this procedure at the hospital’s radiology department between 2005 and 2013. Their analysis of 70 children, published in the March issue Pediatric Radiology, determined that the procedure allowed cytopathological evaluation, and that cytopathology results had a high degree of correlation with surgical pathology findings. Additionally although conscious sedation was used for the majority of the procedures, diagnostic rates were comparable for the patients who were not sedated.

The US-FNAB procedure was preformed for 86 thyroid nodules. Of these, 78 (or 90.7%) were deemed diagnostic, and 69 were benign. Nine of the 78 diagnostic nodules, or 11.5%, were classified as malignant or suspicious for malignancy by cytopathology.

Ethan A. Smith, MD, assistant professor in the division of pediatric radiology at C.S. Mott Children’s Hospital in Ann Arbor, and co-authors reported that 27 of 29 surgically resected nodules had concordant diagnoses. None of the US-FNAB procedures were false positive or false negative for malignancy.

Based on their analysis, the authors suggest that the use of US-FNAB is a feasible procedure to perform on pediatric patients. It showed high diagnostic accuracy, and there were no post-procedural complications. They stated that US-FNAB has the potential to play a crucial role in the assessment of pediatric thyroid nodules, because it has the potential to eliminate the need for additional – and unnecessary – testing or unnecessary surgical procedures.