Intravenous administration of technetium-99m (99mTc) tilmanocept, a radiopharmaceutical imaging agent, shows promise as a safe and effective means of monitoring rheumatoid arthritis (RA) progression, according to a study presented in June at the annual meeting of the Society of Nuclear Medicine and Molecular Imaging (SNMMI) in Anaheim, CA. The results of this first-in-human phase I/phase II clinical study generated excitement among attendees, as no reliable, noninvasive way currently exists to directly monitor joint inflammation.

Rheumatoid arthritis is caused in part by the release of pro-inflammatory cytokines and chemokines by activated macrophages,immune system cells involved in detecting and destroying harmful organisms. 99mTc tilmanocept (TCT) binds to the macrophage mannose receptor CD206, which is highly expressed on activated macrophages in RA. 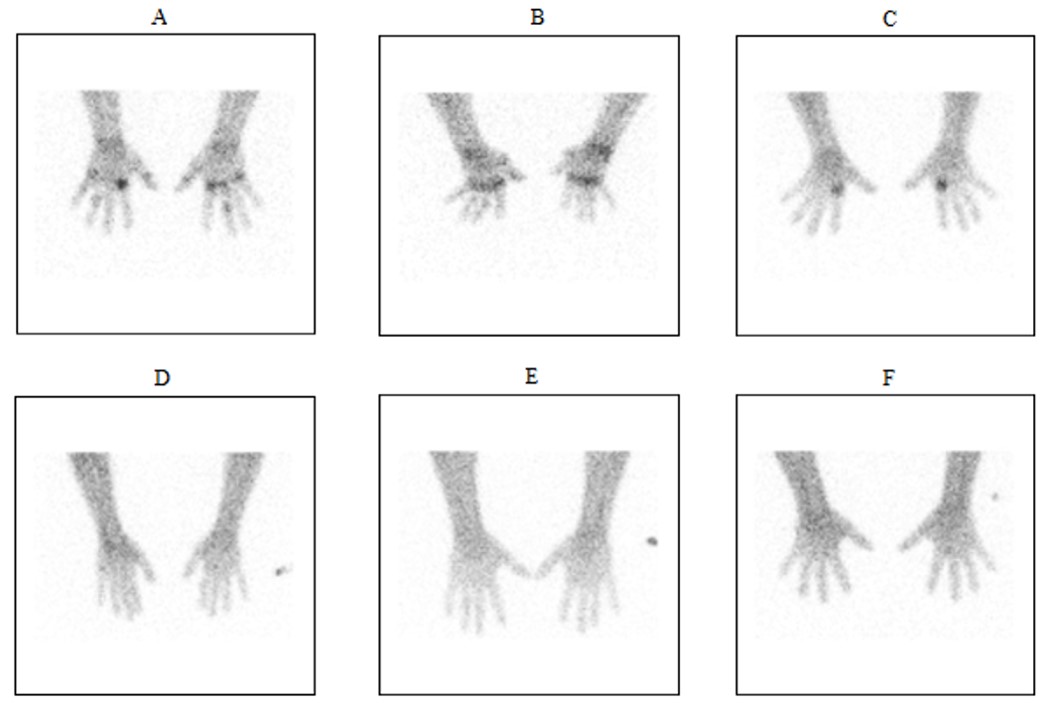 “TCT administration in both RA patients and healthy controls presents initial safety and tolerability findings, as well as a powered determination of an optimal clinical dose and time point for imaging,” he said.

Sponsored by Navidea Biopharmaceuticals (Dublin, OH), the study focused on 33 patients with active RA and six healthy volunteers. They were divided into 11 groups who received various dose combinations of IV administered 99mTc at 1, 5, and 10 mCi, radiolabeled with 50, 200, or 400 μg of tilmanocept. None of the study subjects experienced any adverse drug reactions.

The researchers performed a quantitative assessment of count activity in individual joint spaces of the hands and wrists. Count activity was extracted by placing separate regions of interest on one- and three-planar anterior images. The data were used to model the optimal time point and dose for detecting TCT uptakes in involved RA joints.

Dr. Kardan said planar imaging showed TCT localizing specifically to inflamed joints but not to healthy joints. Study data analysis revealed an optimal mass dose of 134 μg of tilmanocept radiolabeled with 10 mCi 99mTc with imaging taking place 60 to 360 minutes after injection. He recommended a mass dose of 150 μg with the same imaging time frame for future research and use.

“These results provide the foundation for a noninvasive method to monitor disease activity in machrophage-driven inflamed joints with RA, including evaluation of responses to therapy,” said Dr. Kardan. “It may help to guide the most effective therapeutic strategy for RA patients, including when to initiate therapy. This could be of great benefit for the millions of individuals in the world who have this debilitating and painful disease.”