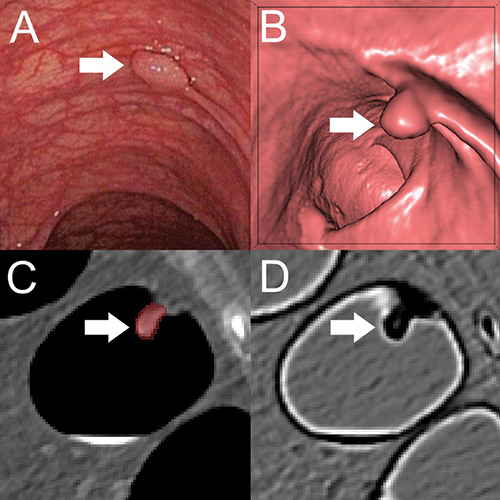 (A) Optical colonoscopy and, (B–D) CT colonography
of a 9-mm polyp (arrow) in the descending colon
of a 78-year-old woman. (B) Virtual fly-through
three-dimensional reconstructions were used for exact
polyp localization. (C) Manual polyp segmentation
was performed in multiplanar two-dimensional CT
colonography images. (D) CT colonography images
were preprocessed for image feature extraction by
application of a dedicated filter.

Researchers have developed a machine learning algorithm to predict the character of individual colorectal polyps, including accurately differentiating benign and premalignant polyps, based on quantitative image features extracted through radiomics. In the study published in Radiology, the authors applied the noninvasive, radiomics-based machine learning method on CT colonography images from a group of asymptomatic patients at average risk of colorectal cancer. The machine learning algorithm was trained on a set of more than 100 colorectal polyps in 63 patients and then tested on a set of 77 polyps in 59 patients.

In the test set, the machine learning approach enabled noninvasive differentiation of benign and premalignant CT colonography-detected colorectal polyps, with a sensitivity of 82%, and specificity of 85%. The area under the curve (AUC), a graphical measurement that reflects how much the model is capable of distinguishing between benign and precancerous polyps, was excellent.

The findings point to a role for machine learning-derived algorithms in boosting the effectiveness of CT colonography as a screening tool for colorectal cancer.

“Adding machine learning-assisted image analysis to conventional, radiological image reading could further improve the clinical significance of CT colonography-based colorectal cancer screening by allowing for a more precise selection of patients eligible for subsequent polypectomy,” Dr. Grosu said. “This method could be used routinely as a second reader in all CT colonography examinations in the distant future.”

Dr. Grosu said that additional studies with larger numbers of patients are needed to validate the findings. He added that these studies should also help drive improvements in the machine learning algorithm.