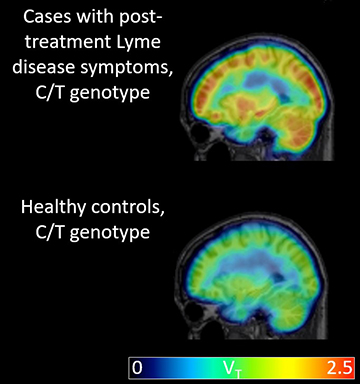 This figure demonstrates higher average binding of the radiotracer
to the translocator protein (TSPO) in brains of individuals with
post-treatment Lyme disease symptoms (top) compared to
genotype-matched healthy controls (bottom).

Post-treatment Lyme disease syndrome occurs in 10% to 20% of patients who are promptly diagnosed and treated.1 Besides chronic fatigue and cognitive difficulties, symptoms may also include pain and/or sleep disruption, any combination of which develop within six months of treatment.

Overactive immune and aberrant activity of microglia, the brain’s resident immune cells, may be linked to the syndrome. Based on this premise, Jennifer Coughlin, MD, associate professor of psychiatry and behavioral sciences, and colleagues have been optimizing a PET imaging treatment using the radiotracer [11C] DPA-713 to measure the 18 kDa mitrochondrial translocator protein (TSPO), which is released primarily by microglia and astrocytes. Their pilot study was based on the hypothesis that Lyme disease is likely to drive a systemic immune response, that patients with post-treatment Lyme disease syndrome would have a high level of TSPO, and that this relatively high distribution in the brain of these patients would be diffusely spread rather than focal in pattern.

The study included 12 patients with a diagnosis of post-treatment Lyme disease and a control group of 19 healthy individuals. All 12 patients reported fatigue and cognitive problems such as memory or concentration difficulties.

The scans revealed that across eight different regions of the brain, the 12 patients had significantly higher levels of TSPO compared with the 19 controls. On average, when all brain regions were combined and the data was adjusted for genotype, brain region, age and BMI, there was a mean difference of 0.58 between the TSPO levels of controls and patients with PTLDS.

“There’s been literature suggesting that patients with PTLDS have some chronic inflammation somewhere, but until now we weren’t able to safely probe the brain itself to verify it,” said Dr. Coughlin. “We thought there might be certain brain regions that would be more vulnerable to inflammation and would be selectively affected, but it really looks like widespread inflammation all across the brain.”

The Johns Hopkins team cautioned that their study was small, and whether the results apply to all people with post-treatment Lyme disease syndrome—such as those with chronic pain but not cognitive symptoms—must await larger and broader studies. In addition, the current study did not include people who recovered from Lyme disease and did not develop PTLDS, a key control group. But for now, the researchers hope their results give PTLDS patients some hope that the science of PTLDS is advancing.

“What this study does is provide evidence that the brain fog in patients with post-treatment Lyme disease syndrome has a physiological basis and isn’t just psychosomatic or related to depression or anxiety,” said John Aucott, MD, director of the Johns Hopkins Lyme Disease Research Center. He noted that drugs designed to curb neuroinflammation and that future variations of the PET scan may be able to determine which subsets of microglia and astrocytes are activated.