Applied Radiology (AR): Welcome, Drs. Canon and Grams. In general, what is the role of fluoroscopy in the evaluation of the bariatric patient?

Dr. Canon: Relative to other imaging methods used to evaluate the gastrointestinal (GI) tract, fluoroscopy is noninvasive, safe, inexpensive and, most importantly, provides dynamic images in real time.8 The fluoroscopic imaging exam performed by the radiologist is patient-specific, and depends primarily on the pre- vs. postoperative status of the patient, as well as any specific signs or symptoms the patient is experiencing. Preoperative evaluation for bariatric surgery is critical to investigate gastric anatomy and delineate any existing abnormalities such as hiatal hernia, scarring from prior ulcer disease, or anything else that alters normal anatomy. Evaluation of esophageal structure and motility is equally important. In addition, findings from the preoperative examination may influence decision making regarding which bariatric operation is most appropriate for the patient. Postsurgically, fluoroscopic imaging of the GI tract is useful to address complications, including leaks, which typically occur shortly after surgery, as well as complications that develop at a later time, such as gastrojejunostomy stricture or marginal ulcer.9,10 (Table 1)

AR: More specifically, how is fluoroscopy with barium contrast used to evaluate the bariatric patient prior to surgery?

Dr. Canon: The typical preoperative patient may undergo either barium esophagography (also referred to as a “barium swallow”) or an upper GI study, or both. An esophagram is the fluoroscopy-guided examination of the esophagus that evaluates motility and esophageal morphology, including the gastroesophageal (GE) junction, and assesses for gastroesophageal reflux (GER). An upper GI study includes esophageal morphology (but not typically motility) and extends the fluoroscopic evaluation to include the stomach and duodenum.11 In the preoperative patient, whether one or both exams are ordered depends on the patient and clinical scenario. Considerations may include: whether the patient is currently experiencing symptoms of a motility disorder or reflux disease; whether the surgeon has questions about the gastric anatomy of the patient, such as history of ulcer disease or prior bariatric surgery; and any limitations related to patient weight, girth, or mobility.12

AR: What about fluoroscopic evaluation after bariatric surgery?

Dr. Grams: Evaluation of postoperative bariatric patients can be divided into those who present with early complications and those who present with delayed or remote events. An immediate/early postoperative “leak” study is completed while the patient is still in the hospital. However, whether a leak study is performed varies based on individual practice patterns;13 some surgeons order a leak study on all of their patients, typically one day after the operation, while others do so only if the patient has worrisome signs or symptoms. Such symptoms include fever, tachycardia, low urine output, respiratory distress, leukocytosis, or disproportionate abdominal pain, and most commonly present within one week after the operation.10,13

Dr. Canon: A leak study is a focused study (1) to determine if the anastomosis is intact, ie, no leak is present; and (2) to ensure that the contrast is moving through appropriately, ie, there is no obstruction. Identifying free leak into the peritoneal cavity is critical, as this is a dire situation and, very often, the patient requires immediate surgery to correct the leak. Conversely, rather than a free leak, there can be a contained leak, and distinguishing between the two is an important branchpoint in the surgeon’s decision-making, ie, whether to do immediate surgery or watchful waiting.

If a leak is suspected, it is important to begin the leak study with a water-soluble, low-osmolar iodinated contrast media (LOCM), in order to limit spillage of barium into the peritoneal cavity.14 If no leak is seen with LOCM, it may be appropriate in some clinical scenarios to follow up with a low-density barium contrast to make sure no small leaks are missed.14

Dr. Grams: In postsurgical patients presenting with delayed or remote symptoms (typically more than one month postsurgery), several factors govern the choice of imaging modality (eg, fluoroscopy vs computed tomography [CT]), patient positioning, and contrast type and amount. These factors include the patient’s symptoms and anatomy, and the preferences of both the surgeon and radiologist. Fluoroscopy is often the first test chosen, as it provides both anatomical and functional information, and is relatively safe and noninvasive. For example, for esophageal motility evaluation to assess dysphagia or regurgitation, a barium esophagram may be performed as the initial test. This study would give us anatomical information such as whether there is a hiatal hernia or esophageal or anastomotic narrowing, as well as dynamic information including whether there is esophageal dysmotility or GER.

Dr. Canon: Note that compared to the preoperative study, a delayed postsurgical study may necessitate a decrease in the volume of contrast, as the patient’s stomach volume may be greatly decreased.

AR: Please tell us about fluoroscopy protocols at your institution.

A single-contrast upper GI examination provides fluoroscopic assessment of the morphology and function of the entire esophagus, stomach, and duodenum. Low-density barium is ingested to distend the esophagus and stomach and assess for contour abnormalities or extrinsic masses.11 The double-contrast upper GI exam combines the same two phases as the double-contrast esophagram exam, but the fluoroscopic assessment extends from the esophagus to include the stomach and duodenum.11 During all of these exams, spot images should be obtained to document normal and abnormal findings.

AR: What are some of the challenges to performing fluoroscopy in bariatric surgery patients?

Note that when performing esophagography or an upper GI fluoroscopy examination, the high frame rate/continuous fluoroscopy so critical to studying dysphagia with a modified barium swallow study is not a concern; relative to the rapid movements involved in swallowing, movement/motility in the esophagus and stomach is much slower. Therefore, when performing these exams, the frame rate can be reduced, decreasing radiation exposure to the patient and to the fluoroscopist while still obtaining the critical information.

AR: How important is communication between the radiologist and the bariatric surgeon?

Dr. Grams: Communication between the radiologist and the surgeon is crucial to maximizing the value of fluoroscopy. For more common indications and procedures, the order tends to be straightforward, and the key then is the thoroughness of the reporting: everything that is evaluated needs to be specified in the report, regardless of whether the findings are normal or abnormal. When the clinical question is more complicated, a consultation between the radiologist and surgeon and, in some cases, reviewing the images together, may be beneficial. So much clinical information is potentially obtainable from fluoroscopy of the upper GI tract, and it is vital to ensure that all of the information obtained in the fluoroscopy suite is transmitted to the surgeon, both before and after bariatric surgery.

Dr. Canon: Bariatric surgery is currently the most effective strategy for weight reduction in patients with obesity, a patient population that has risen dramatically in recent decades. A variety of surgical techniques and imaging modalities are available to the abdominal radiologist to evaluate bariatric patients before and after surgery. For the bariatric surgeon, preoperative upper GI fluoroscopic examination provides information that is critical to clinical decision-making. Postoperatively, these studies must be individually tailored to the patient, and defined by the anatomy and the clinical question.

Imaging Findings and Follow-up: Esophagram showed a large paraesophageal hernia (A), containing dilated loops of jejunum (arrow) with associated delayed emptying (approximately 5 mins) of contrast into more distal small bowel. He was taken to the operating room for redo laparoscopic hiatal hernia repair. Follow-up study (B) revealed reduced small bowel below the hemidiaphragm. He did well and had an uneventful hospitalization. Upon postoperative follow-up, he reported resolution of his preoperative symptoms.

Discussion: Hiatal hernias after Roux-en-Y gastric bypass are relatively common and are thought to be largely asymptomatic. Typically, a portion or all of the cardiac pouch may be above the diaphragm. Symptoms may occur if there is obstruction in emptying the herniated contents or extrinsic compression of the esophagus or cardiac pouch by herniated contents. 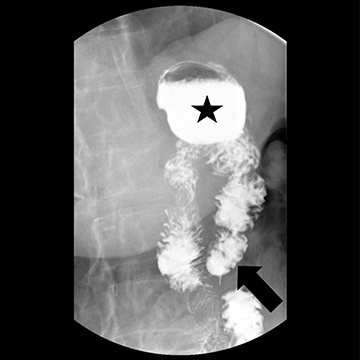 Case Summary: A 66-year-old female status post-Roux-en-Y gastric bypass presented with daily epigastric pain, heartburn, and regurgitation after eating. Symptoms were refractory to proton pump inhibitors, H2 blockers, sucralfate, GI cocktails, and baclofen. A pH study and manometry were normal. EGD showed a patent anastomosis without stricture or ulceration. There did seem to be a long “blind” or “candy-cane” limb (Roux limb proximal to the gastrojejunostomy).

Imaging Findings and Follow-up: Esophagram confirmed a long blind limb (arrow) and demonstrated reflux of blind limb contents retrograde into the gastric pouch (star) and esophagus. The patient underwent laparoscopic resection of the long blind limb and had an uneventful hospitalization. Upon postoperative follow-up, she reported resolution of her preoperative symptoms.

Discussion: Candy cane syndrome is a rare complication of Roux-en-Y gastric bypass, can be difficult to diagnose, and requires a high index of suspicion. It is caused by food or liquid passing into the blind segment of the Roux limb proximal to the gastrojejunostomy. This food or liquid can become lodged in the blind limb or reflux retrograde into the cardiac pouch and possibly into the esophagus.