Most people who have mild concussions recover from their injuries, but 15-30% experience symptoms that can persist for long periods of time and even indefinitely. Using diffusion tensor imaging (DTI) and individualized imaging analytic techniques for each patient, researchers at Albert Einstein College of Medicine and Montefiore Health System in New York City were able to identify findings that predicted which patients were most likely to fully recover. This information can help doctors identify patients for whom interventions are needed and to enable researchers to more effectively test potential therapies. 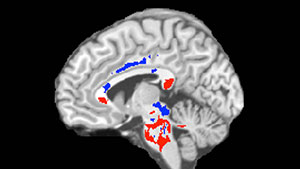 The study, published in the American Journal of Neuroradiology, also identified imaging features of the brain indicative of repairing or compensating for concussion injuries. Further research into these findings might identify different treatment strategies than those currently being used. Principal investigator Michael L. Lipton, MD, PhD., professor of radiology, associate director of the Gruss Magnetic Resonance Research Center, and medical director for MRI, noted that most therapies for traumatic brain injury (TBI) focus on reducing damage from brain injury or preventing an injury from progressing but that none has proven effective. He said that the findings of this study suggest that it might be worthwhile to try a strategy that attempts to enhance the brain’s innate abilities to compensate functionally and structurally for whatever damage has been done.

The prospective longitudinal study sought to identify early DTI biomarkers of mild traumatic brain injury that significantly relate to patient outcomes one year later. Prior research showed the ability of DTI to detect clinically significant traumatic axonal injury pathology, but had not identified a validated prognostic biomarker. The researchers specifically wanted to characterize the relationship between acute diffusion abnormalities in patients with uncomplicated mTBI and their functional outcomes that included cognition, post-concussion syndrome, and health-related quality of life. They used an individualized approach to identify abnormality in each patient, and considered both regional and brain-wide measures and their relationship to outcome.

The patient cohort included 39 patients diagnosed with mTBI who had DTI performed within 16 days of injury and a control group of 40 healthy volunteers. Images of the volunteer group facilitated comparison to identify abnormal fractional anisotropy (FA). The injured patients underwent a battery of assessment questionnaires and tests at the time of imaging, and 26 were subsequently assessed 12 months later.

The research team used a technique (EZ-MAP) that specifically identified abnormalities on an individual patient basis. In earlier research, they had determined that EZ-MAP was able to detect microstructural abnormalities in patients with mTBI. The team determined that structure function relationships are far more effectively detected when measures are extracted from delimited brain regions relevant to a particular function and not diluted by measures from regions not specifically supporting that function. Additionally, use of individual-level delineation of abnormalities revealed associations of hFA with better long term outcomes.

The researchers reported that they found regions of both hFA and lFA in almost all subjects. They also determined that one year post-injury:

“EZ-MAP is highly effective in identifying brain pathology related to long term outcomes,” wrote the authors. They recommended that further studies with larger patient cohorts and with additional patient and injury characteristics be conducted to independently validate the approach.