Breast images generated by digital mammography clearly display breast arterial calcifications (BAC), which reflects medial calcification of arteries and have been associated with markers of subclinical atherosclerotic disease and risk of incident cardiovascular disease, the leading cause of mortality in women. A newly published study in JACC: Cardiovascular Imaging from the Icahn School of Medicine at Mt. Sinai in New York City reports a strong quantitative association between BAC and coronary artery calcification (CAC). The study’s findings suggest that digital mammograms may be a viable screening tool for coronary artery disease (CAD). 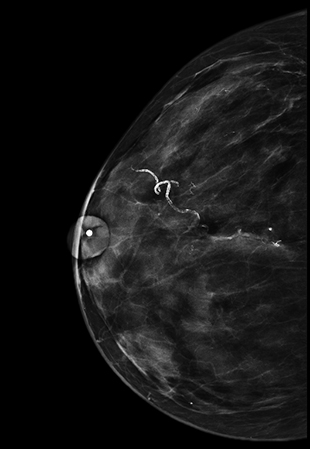 More than 15 million mammograms were ordered or performed in the United States in 2014, according to the National Center for Health Statistics (NCHS) of the U.S. Centers for Disease Control and Prevention.1 In 2013, NCHS estimated that more than two-thirds of all women over age 40 living in the U.S. had a mammogram within a two-year time frame. In 2011, 57.2% of women having screening mammograms were aged 50-74 and 47.5% were aged 40-49.2 However, women over 40 are not routinely screened for CAD.

For this reason, lead author and principal investigator Laurie Margolies, MD, associate professor of radiology, and colleagues conducted a study to quantitatively evaluate the relationship between BAC on digital mammography and CAC on noncontrast CT scans and to determine their correlation with the Framingham Risk Score (FRS) and the 2013 Cholesterol Guidelines Pooled Cohort Equation (PCE). They believed that identifying a significant relationship would provide the opportunity for large-scale cardiac risk assessment of peri- and post-menopausal women undergoing mammography without additional radiation exposure and cost.

The patient cohort included 325 women who had had mammograms and a noncontrast CT scan within a 12-month period between 2011 and 2013 at Mount Sinai. For the 42.5% of women identified with BAC, the researchers recorded the number and percentage of the maximum length of vessels involved and the density of calcium in the most severely affected segment. Patients received a BAC score of 0 to 12 and were categorized into one of three levels of increasing severity (with 33 patients who had previously established CAD excluded from additional analysis). Patients were also categorized into one of three age groups: under 60 years, 60-69 years, and over 70 years.

The researchers determined that BAC-positive patients had more hypertension and chronic kidney disease than BAC-negative patients. CAC-positive patients, noted in 47.6% of the total cohort, were significantly older and had hypertension, chronic kidney disease and diabetes. They identified an increasing frequency of BAC and CAC with increasing age and the increasing percentages of higher CAC in those with BAC in each age group. The individual BAC variables were all significantly predictive of the CAC score. As one example, 56% of women with high risk on BAC were in the highest risk CAC group.

The authors wrote that pending confirmation of the predictive power of BAC in an outcomes study, “it is reasonable to recommend further risk assessment of BAC-positive women, preferably with a gated CAC scan.” They noted that the greatest value for women aged 39 to 59, who could be considered low risk by virtue of their age, may be the 81% negative predictive value for CAC. They concluded that the findingsof their study “sets the stage for the prospective, bias-free outcomes trial that is required before BAC can be routinely incorporated into the prevention paradigm.”

The authors of an accompanying editorial had a stronger recommendation: BAC detection should be included as part of any mammography interpretation and tracked as part of core quality performance measures. Khurram Nasir, MD, of the Center for Healthcare Advancement and Outcomes at Baptist Health South Florida in Miami, and John W. McEvoy, of the Johns Hopkins Ciccarone Center for the Prevention of Heart Disease in Baltimore, pointed out that no consensus exists on national screening for early signs of atherosclerotic cardiovascular disease (ASCVD) such as CAC testing even though cardiovascular disease is the leading cause of morbidity and mortality in women. They stated that approximately 4 million women having a screening mammogram in the United States will exhibit BAC, and that 50%-75% of these women will likely have signs of premature ASCVD. Still to be determined is whether the best use of BAC is to trigger additional testing or to directly inform preventive treatment decisions. “We believe rather than debating what we should recommend in these situations, we are better off empowering our patients to take charge of their own decisions,” they wrote, noting that current approaches to identifying early CAD are underestimating the presence and increasing burden of atherosclerotic disease, potentially leading to the underuse of preventive therapies in higher-risk patients. In Nasir’s and McEvoy’s opinion, the Mount Sinai study provides “strong motivation” for widespread documentation of BAC in mammography reports and improving the education of radiologists and primary care providers regarding the link between BAC and ASCVD. They also believe that related standard of care and performance measures should be established, and that further research should be undertaken.