Coronary CT angiography (CTA) played a vital role in a large cardiac imaging study that showed higher inflammatory marker levels are associated with greater prevalence of coronary stenosis in HIV-positive men. Findings of the largest coronary CTA imaging study on men infected with HIV to date were published in the Journal of the American Heart Association (AHA). 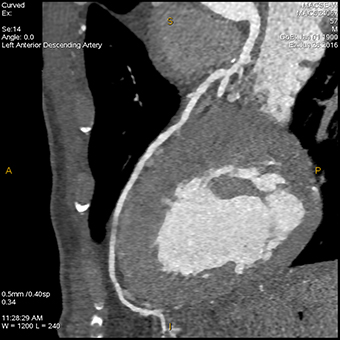 The 923-participant, seven-institution study led by Hossein Bahrami, MD, PhD, assistant professor of cardiovascular medicine, radiology and preventive medicine at the Keck School of Medicine of the University of Southern California, confirmed a strong independent association between the presence of specific biomarkers and subclinical coronary artery disease (CAD) detected by the scans. HIV-infected individuals have an estimated twofold higher risk of CAD compare to those who are not infected with HIV. The development of antiretroviral therapy has significantly prolonged their lifespans. However, HIV-positive individuals are more prone to chronic illness, such as cardiovascular disease and CAD, often at a young age.

Study participants included 575 HIV-infected men and 348 uninfected men, all of whom were participants in the Multicenter AIDS Cohort Study. All had noncontrast CT scans for coronary artery calcification and 692 had CTA scans. Inflammatory biomarkers were identified in the HIV-infected men. Several of these representing different domains of inflammation were significantly associated with a greater prevalence of CAS on CTA. These associations were independent of traditional risk factors and HIV clinical factors.

“Although this study does not definitely prove the causal relationship between these markers and heart disease, it is suggestive of a possible role that persistent inflammation may plan in creasing the risk of heart disease in HIV-infected individuals,” said Dr. Bahrami. He stated that the study’s findings will enable primary care physicians and cardiologists to better manage the health of HIV positive patients.

In ongoing research at the Keck School, Dr. Bahrami and colleagues are using cardiac MRI to study the changes in heart muscle, as well as details of coronary artery function in HIV-positive men. These patients appear to have even higher risk of abnormalities in the heart muscles compared to their increased risk of CAD.