Relaxivity is an important criterion in selecting a GBCA. “It is a measure of how rapidly it affects the re-growing of longitudinal magnetization. This effect increases the brightness of T1 images and results in improved lesion detection and delineation. Radiologists widely utilize GBCAs to enhance tumors, vessels, or other structures,” says Kohkan Shamsi, MD, PhD, co-founder and principal of RadMD, an imaging consultancy.

There are several US Food and Drug Administration (FDA)-approved GBCAs and, of those, there are two different types of chelates: linear, which partially wrap around the gadolinium (Gd) molecule, and macrocyclic, which form a “cage” around the gadolinium and are designed to tightly bind the molecule. Dotarem® (gadoterate meglumine) Injection and Gadavist® (gadobutrol) Injection are two commonly used macrocyclic GBCAs.2 Despite the difference in relaxivity between Dotarem® and Gadavist®, there is no measurable difference in clinical benefit observed between these two GBCAs despite quantitative mean lesion percentage enhancement being higher with gadobutrol.3 Dr. Shamsi agrees with those findings and believes that the small differences in relaxivity do not reflect in clinical efficacy.4

This has been shown in the REMIND Study, a multicenter, double-blind, randomized, controlled intraindividual crossover study, which demonstrated “the non-inferiority of gadoterate meglumine [Dotarem®] versus gadobutrol [Gadavist®] for overall visualization and characterization of primary brain tumors.”1,3

This noninferiority study included 279 patients. Both agents (0.1 mmol/kg of body weight dose) were administered and assessed with MR imaging at intervals of two to 14 days. MR scans were performed on patients using 1.5T systems at 15 centers and 3T systems at 12 centers. Dr. Shamsi notes that this is relevant, as nearly half of the investigational sites – and an increasing number of radiology facilities – are implementing 3T machines. The study also notes that there is a marginal decrease in the relaxivity of all contrast agents at higher field strengths.3 This study has shown the noninferiority of Dotarem® to Gadavist® on 1.5T and 3T MRI.3

All three readers in the REMIND study scored lesion visualization and characterization as good or excellent for the majority of the patients (>90%) receiving either of the contrast agents.1,3 Additionally, in most cases, there was no preference among readers for either contrast agent regarding border delineation, internal morphology, and the qualitative degree of contrast enhancement, despite higher quantitative mean lesion percentage enhancement with gadobutrol.1,3

The study also confirmed a low incidence of immediate reported adverse events with both agents, as shown in multiple previous studies.3,5,6

“The results of this trial show that Dotarem® was noninferior to Gadavist® for visualization parameters, and the adverse event profile was similar. So, this study supports that there is no difference in clinical benefit between Dotarem® and Gadavist®,” says Dr. Shamsi. 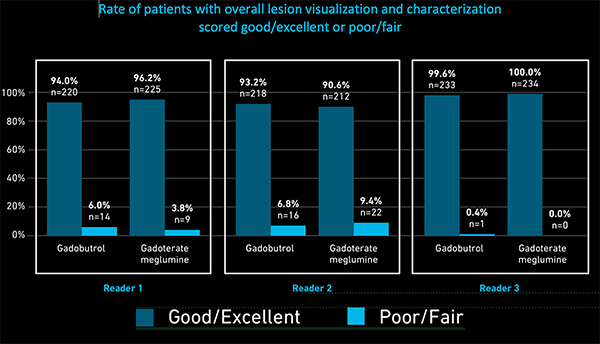 For all readers in the REMIND study, more than 90% presented with good or excellent overall lesion visualization and characterization with either of the two contrast agents. Additionally, in most cases, there was no preference of the among readers for either contrast agent regarding border delineation, internal morphology, and the qualitative degree of contrast enhancement, despite higher quantitative mean lesion percentage enhancement being higher with gadobutrol.1,3

The efficacy of most GBCAs is similar, with recent focus moving to safety and stability. Given the features and benefits of the utilization of MR contrast in MRI imaging, Dr. Shamsi says that in addition to efficacy, safety and stability should drive the selection of a contrast agent.

To date, the only known adverse health effect related to gadolinium retention is a rare condition called nephrogenic systemic fibrosis (NSF) that occurs in a small subgroup of patients with pre-existing kidney failure.2 Adverse events involving multiple organ systems have been reported in patients with normal kidney function.2 A causal association between these adverse events and gadolinium retention has not been established.2

To further address concerns about Gd retention, several recently published studies explored the retention of Gd in various animal tissues. While experts may agree that levels of Gd retention can vary among macrocyclic agents, recent peer-reviewed animal studies demonstrate the complexities of the topic and that a myriad of uncertainties remain. Also, notably, the clinical significance, if any, of Gd retention in patients with normal renal function has not been demonstrated.5, 9-13 Tissue retention of Gadolinium in animal models likely depends on the timeframe investigated, with washout of macrocyclic GBCAs continuing for at least one year.10

Bussi et al. compared Gd levels in blood, cerebrum, cerebellum, liver, femur, kidneys, and skin after multiple exposures of rats to Dotarem®, Gadavist®, and ProHance®, and found that at 28 days (4 weeks), there was less Gd retention with ProHance than with Dotarem® or Gadavist in most tissues. However, Dotarem® had significantly less Gd presence in the femur, where higher levels of Gd deposition were noted for all the GBCAs.9

Jost et al. examined rats that received multiple administrations of one of the three macrocyclic agents on the market (ProHance, Dotarem® and Gadavist) at 5, 26 and 52 weeks following administration. This study confirmed that after 5 weeks, gadolinium concentrations in the cerebrum, cerebellum and brainstem were higher with Dotarem® when compared to ProHance, similar to the study by Bussi et al. However, while the washout of all the macrocyclic agents were similar, after 26 and 52 weeks, Dotarem® measured the lowest total concentration of retained gadolinium across brain regions studied, illustrating a continuous and long-term elimination.10

GBCA stability plays an important role in selection, and safety can be dependent on structure and stability of the agent. “Dotarem® is a macrocyclic as well as an ionic agent, which supports higher thermodynamic and kinetic stability,” says Dr. Shamsi. The high molecular stability of the agent can minimize the risk of gadolinium release from the GBCA molecule.14,15

Dotarem® has gained a significant share of the U.S. market and continues to be a leading choice of radiologists and technologists, with no unconfounded cases of NSF reported to date. 5,14

GBCA Selection for Clinical Use

When institutions are selecting an MR contrast agent, physicians with knowledge and experience about GBCAs, current related issues, and the latest FDA Safety Communications should be part of the decision-making team. Therefore, when a risk-benefit analysis supports the use of contrast with MRI, stability is an important consideration when selecting from among the currently available GBCAs.

Overall, Dr. Shamsi says, macrocyclic agents provide diagnostic benefits in the general population, and he supports the FDA’s requirement that the GBCA medication guide be given to patients to explain the risks of contrast-enhanced MRI.

“Gadolinium-based contrast agents have been approved for clinical use for over 30 years and they provide immense diagnostic benefit to the patients,” says Dr. Shamsi. “They play a very important role in diagnosing diseases and improving patient management.”

Since its release in 1989, Dotarem® has been a leading contrast agent in Europe, Asia, Africa, the Middle East, and South America. Dotarem® Injection received FDA approval in 2013, becoming the first macrocyclic, ionic, gadolinium-based contrast agent (GBCA) in the United States. In just seven years, it has become the No. 2 MR contrast agent in the U.S. and is currently No. 1 in the world, with more than 100 million doses administered in 70 countries.16

Guerbet LLC., the US affiliate of Guerbet, is a pharmaceutical and medical device company that offers a comprehensive range of specialized solutions for diagnostic and interventional radiology. The company’s portfolio includes products, services, and digital software solutions for MRI, CT, and interventional radiology (including the cath lab and women’s health). Driven by its commitment to advance radiology, Guerbet has designed a range of interconnected contrast imaging solutions to enhance decision making at all points of a patient’s journey — diagnosis, treatment, documentation, and follow-up — so that clinicians can focus on what matters most: quickly and efficiently improving the patient experience.

Applied Radiology spoke with Kohkan Shamsi, MD, PhD, co-founder and principal of RadMD, about his experience with the utilization of gadolinium-based contrast agents. RadMD provides expertise-based services related to imaging in clinical trials including consulting, training, and sourcing highly trained and experienced independent image reviewers from its global group of nearly 600 physicians. As a radiologist with more than 25 years of clinical development experience for drugs and devices, Dr. Shamsi has conceptualized, coordinated, and executed more than 100 multi-center, international clinical trials in the areas of oncology, cardiology, neurology and contrast agent for MRI, CT, and radiopharmaceuticals that led to approval of several contrast agents globally. He has contributed towards development of guidelines for clinical development of contrast agents for the FDA and EMA, and the FDA draft imaging guidance for use of imaging in oncology trials.

Indications and Usage
DOTAREM® (gadoterate meglumine) injection is a prescription gadolinium-based contrast agent indicated for intravenous use with magnetic resonance imaging (MRI) in brain (intracranial), spine and associated tissues in adult and pediatric patients (including term neonates) to detect and visualize areas with disruption of the blood brain barrier (BBB) and/or abnormal vascularity.

Use in Specific Populations

You are encouraged to report negative side effects of prescription drugs to the FDA. Visit www.fda.gov/medwatch or call 1-800-FDA-1088. Please see the full Prescribing Information, including the patient Medication Guide, for additional important safety information. For more information, visit https://www.guerbet.com/products-solutions/