Use of a Knowledge-based Iterative Reconstruction Technique, IMR, to Improve Image Quality and Lower Radiation Dose

By Tariq A. Hameed, MD

Increased utilization of CT in clinical imaging,1 together with the potential for increased cancer risk associated with patient exposure to ionizing radiation,2 has led to the recognition that we need to reduce radiation dose in CT.3 With filtered back projection (FBP) techniques, commonly used to reconstruct clinical CT images, efforts to reduce radiation dose are associated with an increase in image noise, which negatively impacts image quality.

IR techniques, in which more complex modeling is used to iteratively reconstruct the raw data, result in inherently lower image noise, and their recent introduction into clinical practice allows for reduced radiation dose while preserving image quality.4 Several of these noise reduction filters, such as iDose4 (Philips Healthcare), include a hybrid of FBP with a variable component of IR. More recently, knowledge-based IR techniques, such as Iterative Model Reconstruction (IMR, Philips Healthcare), have been developed to further reduce image noise, with the potential for improved image quality with similar or reduced radiation dose*. Teaching cases, including side-by-side comparisons of images obtained in our practice using IMR and the noise reduction filters for a variety of applications, are presented here.

Use of IMR in Clinical Practice

IMR is used in a variety of ways in our practice. Since our department has already reduced radiation dose as part of standard practice, we use IMR to improve the image quality at a given radiation dose. For example, for abdominal pelvic CT imaging, we can use thin-section (1 mm) imaging to improve spatial resolution, and this may allow characterization of commonly seen subcentimeter, hypodense renal or hepatic lesions

Due to IMR’s lower image noise and improved low-contrast resolution, lesion detection may improve on routine abdominal contrast-enhanced examinations (Case 2), and this benefit is even greater for examinations performed without intravenous contrast (Case 3).

We also utilize IMR to perform low radiation dose CT examinations in patients with renal stone disease requiring serial examinations. Such exams are usually performed with a tube current of 30 mAs or less and a tube potential of 120 KVp, and at these settings, the reference CT dose (CTDIvol) for non-obese (BMI <30) patients is 2 mGy. The resulting images are adequate for stone detection.5 Thin-section (1 mm) images with lower noise on IMR provide improved detection of small stones (Case 4).

Finally, we use IMR for CT angiography (CTA) examinations that require high contrast and high spatial resolution; in these cases, IMR is useful to reduce section thickness and lower noise (Case 5). In addition, IMR is helpful in CTA examinations with suboptimal density of contrast enhancement in blood vessels, which might result from contrast injection or timing issues. Due largely to reduced noise, IMR images often can provide adequate diagnostic information. 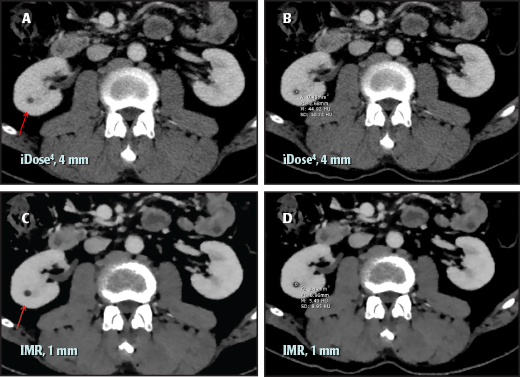 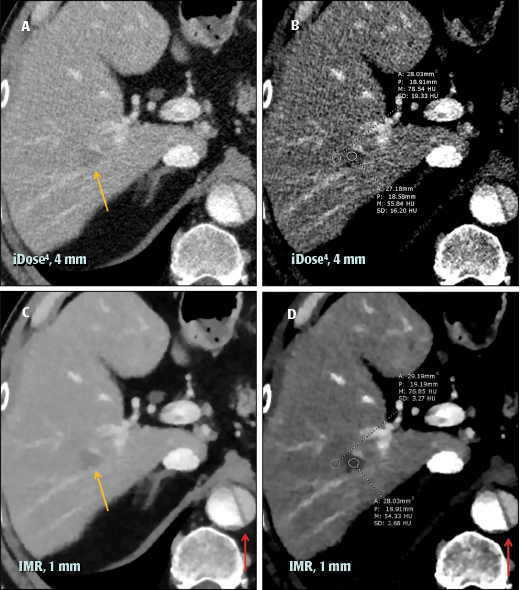 In this case, abdominal CT with IV contrast is performed and reveals a hypodense lesion in the right lobe of the liver (yellow arrow) that is of a slightly lower density than the surrounding liver parenchyma. The internal density of the lesion and surrounding parenchyma is similar on both iDose4 (A, B) and on IMR (C, D) images. However, on the IMR image (D), the noise level is lower compared to the iDose4 image (B), which allows for improved delineation of the lesion compared to the surrounding parenchyma. The dissection flap (red arrow) is also more sharply delineated from the surrounding true and false lumen on the IMR image (C). Therefore, using the same CT examination, but 2 different processing techniques, it is apparent that with IMR, there is better contrast resolution between the lesion and the surrounding parenchyma, improving the sensitivity for lesion detection and providing better visualization of the abnormality, compared to iDose4. The ability to better visualize abnormalities such as tumors or metastatic disease has the potential to significantly impact patient management. 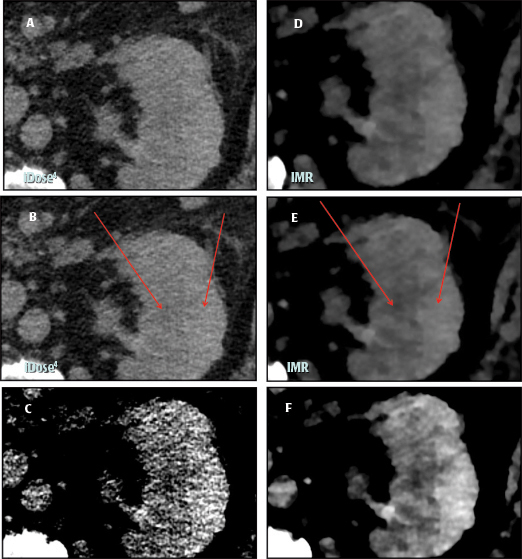 IMR is also used routinely in CT abdomen examinations performed without IV contrast. Here, the examination shows a left renal subcapsular hematoma at lateral aspect with a density slightly higher than the adjacent renal parenchyma. Reconstruction of axial images is performed with both iDose4 (4-mm [A, B, C]) and IMR (4-mm [D, E, F]). The hematoma is more clearly delineated on the IMR image (D). The density of the hematoma and adjacent renal parenchyma is the same on iDose4 and on IMR (arrows; B, E); however, on the IMR image, the lower background noise better shows the difference in density between the two adjacent areas of the subcapsular hematoma and renal parenchyma. This difference in density is even more pronounced with a narrow window width (F). As this is the same examination, the CT density difference between the hematoma and adjacent parenchyma is the same for the two techniques, but with IMR, this difference is more apparent; this allows for improved lesion detection, which may be more useful in CT examinations performed without intravenous contrast. 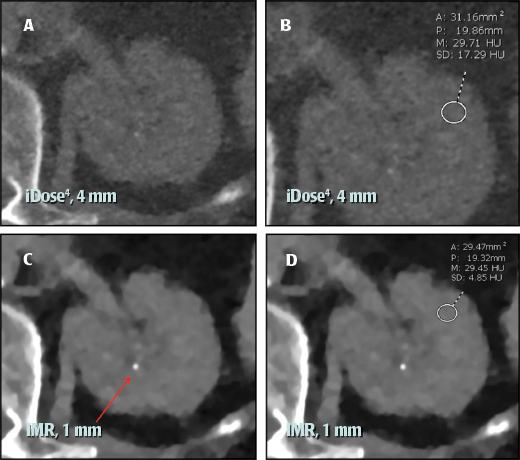 A low radiation dose CT protocol without IV contrast is used in patients with renal stone disease who may need repeated CT examinations for follow up of treatment or surveillance. In this exam, the CTDIvol was 2 mGy, and axial images are reconstructed with both iDose4 (4-mm [A, B]) and IMR (1-mm [C, D]). On 1-mm images with IMR, a small left renal stone is better delineated (arrow; C) compared to 4-mm images with iDose4 (A), due to partial volume averaging on 4-mm images. The renal parenchymal density noise level (SD) on IMR is even lower with a slice thickness of 1 mm (D), compared with 4 mm on iDose4 (B), which allows for thin sections with low radiation dose. In this case, 1-mm IMR images allow for improved detection of the stone, which may affect patient management. 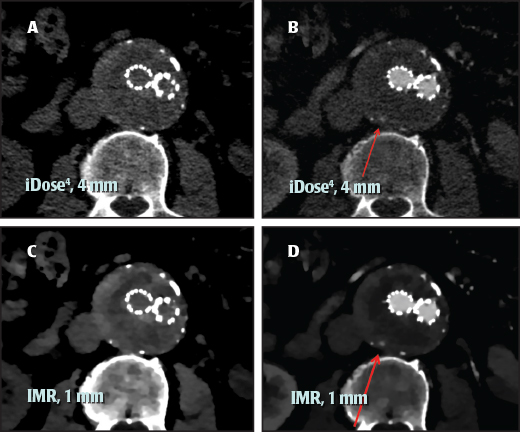 CTA of the abdomen is performed without and with IV contrast to check for an endoleak following endograft repair of an abdominal aortic aneurysm. The following reconstructions are performed: iDose4 2-mm axial precontrast (A); iDose4 2-mm axial postcontrast (B); IMR 1-mm axial precontrast (C); and IMR 1-mm axial postcontrast (D). The small focus of enhancement in the aneurysm sac on postcontrast images (arrow, B, D), indicative of an endoleak, is more clearly delineated on IMR (D). With IMR, the ability to use thinner slices and less noise allows for better visualization of the endoleak with greater diagnostic confidence, whereas the endoleak is much more difficult to see on the iDose4 images. Although no immediate intervention may be performed for small endoleaks, the duration of follow-up CT examination may be reduced to assess for change and determine if repair is required before the endoleak progresses

Relative to FBP or IR techniques, knowledge-based IR allows for improved image quality without an increase in radiation dose. We use IMR on routine abdominal CT and CTA examinations with relatively low radiation doses, as well as renal stone CT examinations with low radiation dose. Because IMR images are virtually noise free, they appear different from iDose4 images. Therefore, in the initial stages, reviewing images side-by-side with both reconstruction techniques may help to achieve familiarity with the new technique.

Dr. Hameed is an Assistant Professor of Clinical Radiology and Imaging Sciences at Indiana University School of Medicine.