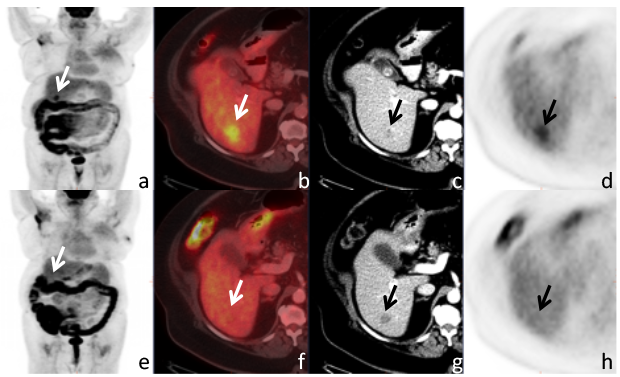 Determining the response of tumors to systemic therapy is in management of women with metastatic breast cancer. Fluorodeoxyglucose positron emission tomography/computed tomography (FDG PET/CT) appears to be a superior predictor of progression-free survival (PFS) and disease-specific survival (DSS) compared to contrast-enhanced computed tomography (CT), according to an evaluation conducted at Memorial Sloan Kettering Cancer Center (MSKCC) in New York City.

Study findings published in the European Journal of Nuclear Medicine and Molecular Imaging revealed that the differences in response assessment could have caused changes in patient management in 25% of the cohort of 65 women with stage IV breast cancer.

The current standard for monitoring tumor response and breast cancer progression has been based on changes in tumor size. This is very effectively measured on contrast-enhanced CT (CE-CT) imaging. However, the ability of FDG PET/CT to measure glucose metabolism, assess metabolic activity in osseous metastases, and differentiate an active tumor from post-therapeutic change, shown by changes in FDG uptake, have demonstrated a high accuracy for predicting histopathologic response of breast cancer.

Patients who had participated in a clinical trial conducted at MSKCC between 2007 and 2012 and who had undergone a baseline CE-CT and FDG PET/CT within 28 days prior to initiation of therapy and follow-up exams within 90 days following initiation of therapy were included in the study. Two radiologists, one for each modality, reviewed the before/after examinations but were blinded to the records of the other modality and any clinical follow-up information.

“Our data suggests that treatment monitoring with FDG PET/CT could benefit patients with breast cancer in two ways: by avoiding taking patients off treatment who are considered to have progressive disease by CE-CT but who respond by PET/CT and by changing therapy in patients considered stable on CE-CT but show no response on FDG PET/CT,” they wrote. “Additionally, monitoring tumor response to therapy with FDG PET/CT may not only improve the quality of clinical trials using response as an endpoint, but may also reduce the morbidity and costs of ineffective therapies in clinical practice.”