Spineboards and headlocks used to immobilize trauma patients who may have spinal injuries are known to create artifacts that can reduce the quality of CT images and potentially impede rapid accurate diagnoses. Their impact is described in a study from the Netherlands published in the June issue of Emergency Radiology.

Brain CT scans of 212 consecutive trauma patients admitted to Maastricht University Medical Center in 2011 were assessed for artifacts by a multidisciplinary team of radiologists, trauma surgeons, and emergency physicians. These researchers wanted to determine what different types of spineboards and headboards generated artifacts and the frequency of their occurrence.

A variety of spinal immobilization devices, some of new design, are now being used. These include the traditional rigid spineboard, a newly developed soft-layered spineboards, and a vacuum mattress. Headblocks in use include a universal head immobilizer made of standard soft-foam and new design headblocks consisting of padded hard plastic. The authors hypothesized that the new device designs would cause fewer CT image quality problems than conventional soft foam headblocks and rigid spineboards.

The patient cohort represented this mix of devices used. The majority (65%) were immobilized on rigid spineboards with new design headblocks. 11% were scanned lying on soft-layered spineboards, with or without headblocks, and 12% had had all immobilization devices removed before having a CT scan. 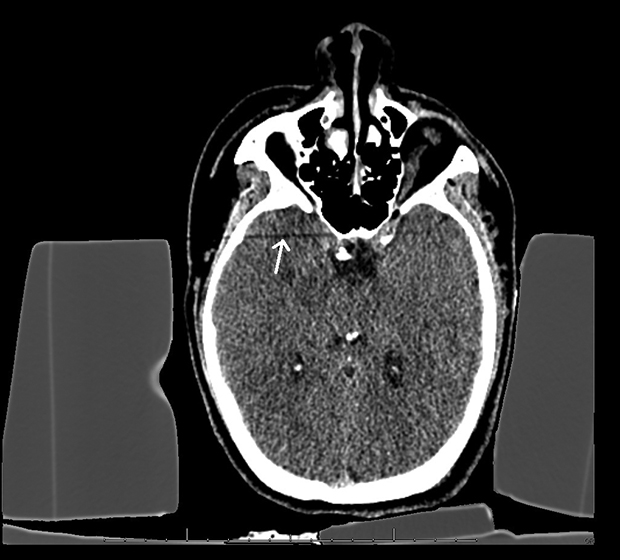 A radiologist reviewed the patients’ exams to identify scans that contained artifacts caused by spinal immobilization devices. These were defined as any disturbance in visual objects such as lines or streaks caused by objects lying between the radiation beam and the patient, and were caused by beam hardening due to energy absorption by the by the devices. Artifacts were initially judged based on the 5 mm reconstruction of the scans. For images in which artifacts were identified, the original 1 mm scans were used to assess impact of the artifacts on clinical judgment. Additionally, a random sample of 54 scans were independently reviewed by a second radiologist who was blinded from the assessment of the first observer.

Overall, artifacts were seen in 67% of CT scans of patients on immobilization devices. These artifacts hampered diagnosis in 10% of cases. The authors reported that scans performed with the presence of spineboards or vacuum mattresses but without headblocks had an artifact rate of 40% to 50%. With the addition of headblocks, the artifact rate increased to 70% to 78%. The authors explained that 20 patients had scans with artifacts caused by immobilization devices that hampered clinical judgment. The majority (75%) of these were caused by a combination of a rigid spineboard and new design headboards. The authors also reported that 20% of the CT scan slices performed on a phantom were disturbed by artifacts. The configurations using headblocks with either rigid or soft-layered spineboards significantly increased the number of slices with artifacts. Standard soft-foam headblocks produced more artifacts. The vacuum mattress produced the least number of artifacts.